Minimalist Challenge is getting to be a favorite Tournament of the Bayou Coast Kayak Fishing Club and it is one of my personal favorites (my first tournament payout of a whopping $33). Every kayaker get's roughly the same lures and they can have 5 jigheads that's it: 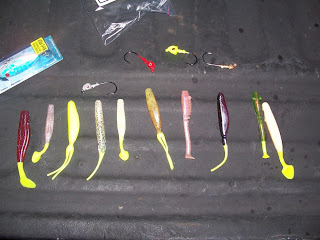 Thanks to my new sponsor TTF for the "Killer baits" and Marshworks provided many of the Jigheads. I shared my Marshworks heads and used the TTF heads (not pictured).

So we recieved our baits at 4:30am, rigged our poles and it was game on!

What a unique day on the water. I'm sorry I forget to take pictures while I'm out on the water but fortunately I had a little help from my friends. The hardest thing to capture on film is the start out of this tournament 60 kayakers in the dark heading off in a pack. Imagine 60 little lights bobbing on the water (some larger than others) and then a whistle blows and all those lights take off in one direction. Slowly one peels off here another there but the main 40 head off together.
One moment of comedy occured because the lead yakker was off course - realized it and 40 lights stirred around and then changed direction and off again as fast as they could paddle or peddle.

I made a critical decision at this point to break away from the pack and chase "plan C". Truth is "Plan A" didn't work for about 30 guys but "Plan B" was a melee. I didn't get a great picture but for now if you look at the little dots out there they are 30 kayakers and at least a dozen "stinkpots" (motorboats).

After I paddled around for 2 hours covering over 5 miles I had 1 redfish in the boat. As I approached the mob scene I discovered well over a dozen guys not only with a limit of red but they were "culling" or sorting out smaller ones for bigger ones. Then to add injury to insult I fished for another 20 minutes without a bite while everyone within a 2 acre area was catching reds hand over fist!

Finally it turned around thanks to this guy leaving and me taking his spot (sorry I can't remember your name): 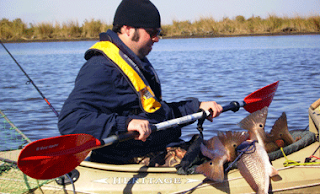 Yes those are fish spilling out over his boat.

Within 45 minutes I had my limit of redfish and had culled out most of the smaller ones then I made another critical decision and this one was money! I decided that these guys have been culling reds for 2 hours the only way I'll pass them is to catch some trout. Off I went to some old standby's. Along the way I see a "Blazer Bay" boat just sitting out in the middle of nowhere and he's on anchor (Sulfur Mine is generally a "drift" method spot). So I asked him what was up and he said he was on some trout.

I moved a polite distance away and started casting - bang fish on! Then nothing for about 20 minutes. I'm down to the last hour - what will I do? Finally trout on and I caught 17 quick fish.

Then it was a desperate paddle to the launch. 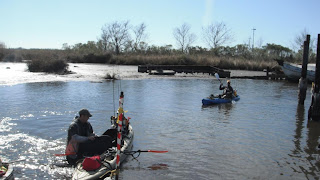 Five minutes to spare and the guy in front of me has a double limit - ouch. 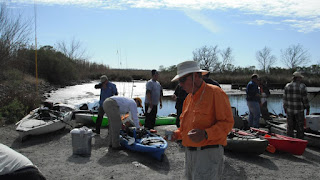 Still I'm feeling good as Denis comes in behind me (my regular fishing buddy). 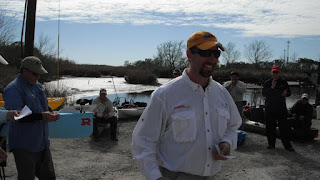 2nd place feels alright to me. Denis (behind me) picked up 3rd I edged him by.9lb!

But this guy "Gnatless" - killed it: 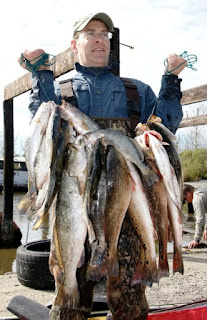 I want to thank the guys at TTF for the baits and also John from Pack and Paddle for sponsoring our Angler of the Year series.
You can get the offical story here