Well I finished up a disappointing day at Redfish Rumble 4 (last year I finished 2nd). I was out of the money but somewhere around 8th place (volunteer events are sometimes slow to finalize results).

The Spoon just wasn't producing for me when I stumbled on a school of Reds and a commedy of errors ensued. First two reds swam directly at my boat while my lure was far away in the water. By the time I retrieved my line they "spooked on the boat" and took off. Then the next red took one look at my spoon and ran for all he or she was worth. Then it was cast, cast, cast, nothing, tried black, tried gold, tried a popping cork. Finally I spooked yet another red and decided to get radical.

Out came the Nemire Buzz Ripper Jr. in black (Heres a trick: pull off the skirt and it fishes like a very annoying inline spinner). 10:30 am 2 hours left to fish nothing in the bag - Throw out the Buzz Ripper and Bang fish on! Nice fat 25" red. But by then I've beat this school to death. I head on and about 30 minutes later bam fish on and another nice 25" red. About another 45 minutes and bam! Nice fish at 26 inches but then the lights just went out. No more fish.

I've had some success at this tourney and location but this year none of my standard holes produced in fact all three fish were caught in new fishing spots.

Just a great reminder of how important "prefishing" an event is and to remember to keep changing those lures! The Buzz Ripper Jr. is great for when the fish are finicky it gets an anger response out of them and BAM (kinda like that car playing rap music next to you at the light).

If I had only put that thing on the line 2 hours sooner.... There's always next year!

Here's an example of how reds respond to the buzz ripper (this lure was demolished after 2 redfish the newer model the nstronger wire is great and mine only needed minor adjustments after 3 bruising fish). 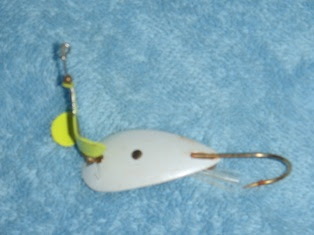 Posted by Bill Crawford at 3:37 PM