Silver and Gold in the Mine 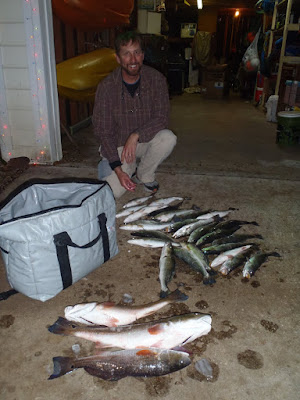 One of my favorite fishing locations is the "Sulfur Mine" near Lockport, La. I just love getting in there and digging up treasures of Speckled Trout, and Redfish. Yesterday I got off to a late start but it turned out just fine. I paddled out to the mine stopping at two preliminary spots that I always try for a few fish but that was it second stop it was on. My limit of 25 trout took about 2 hours to complete. Then I paddled off to look for reds.

The problem wasn't finding the reds it was getting to them. Despite the frigid day they were hanging out in about 4" of water. One big ole bruiser running about 30 inches was taunting me for about an hour. He was up in about two inches of water just throwing bait and mud everywhere but it was too shallow for my kayak!

So I fished around the edge of the pond he was in. I was actually stuck in the mud and caught two nice reds. Had an odd day in that I then proceeded to lose four nice reds after significant battles. They were throwing mud everywhere but they also threw my hooks!

Finally I pushed myself into the pond with the big red but he vanished into thin air. I did see a 4 foot long gar with 2/3rds of his body sticking in the air and the rest in the mud. Not sure if he was staying warm, stuck, or dying. He moved a few times but didn't flinch when I hit him with my spoon.

Anyway I ran out of calories and went home tired but happy remembering to thank God for his creation and knowing that we had meals for our family and a couple of others. What a blessing.

Lures for the day:

TTF Killer Flats Minnows in Phat Tuesday and Texas Roach did most of the damage including two of the reds.

Nickel Plated Spoon did the rest (it was a windy day so I was throwing a 1/2 ounce Johnson instead of the Black Nemire - my regular bait). Reds were having nothing to do with the Gold Spoon today. Don't forget to go dark often in the winter and on overcast days.
Posted by Bill Crawford at 3:13 PM