Some days just don't add up.  Weather was good.  Water clarity was "ok" not great but the grass was there to clean it up.  Day after a full moon can be tricky.  But the fish that saw the bait went after it as if they were starving.  So why was yesterday's trip so tough?  I can't tell you for sure.  That's when you just have to keep working on it - grind a trip out sometimes and you will eventually produce. 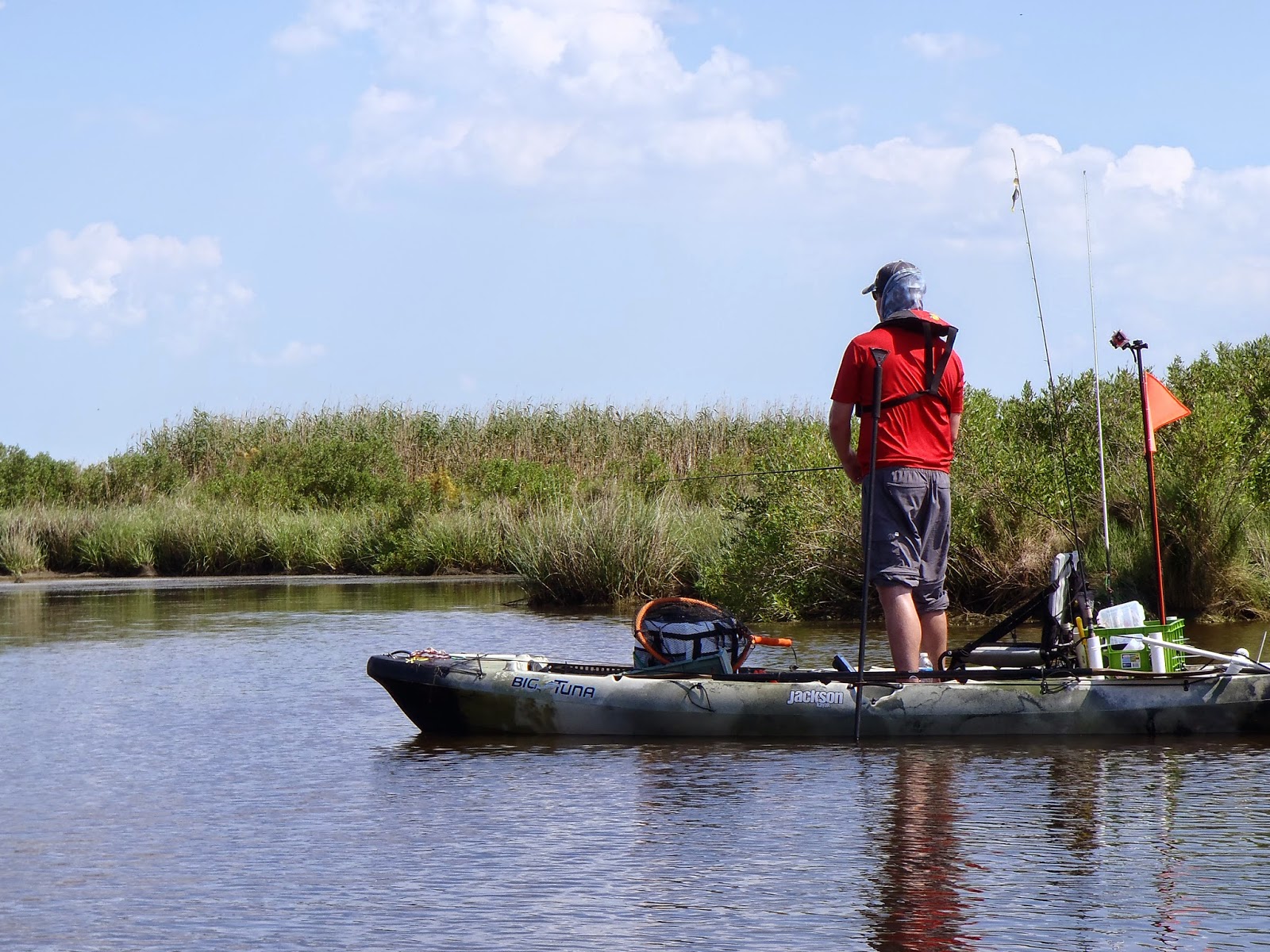 All you can do is keep searching.  Eventually something will break through for you.  We started out the day a little late hoping for the wind to shift.  It did slightly but not as much as we had hoped.  But we were able to find some pockets of still water as seen above by searching out windbreaks like the Roseau Cane in the background.

In the patches of grass we could find some clean water but the bottom of the ponds were stained a reddish color - advantage "red"fish.  They were well up in the grass which included both the longer grass for which I do not know the name and the carpet grass on the bottom often called "snot grass" for the way it wraps around all it touches and makes dripping balls of green yuckiness (yes I know that is not a word).

But the fishing buddy for the day and I were working hard to produce something - anything.  After a couple of spooked fish and a few light taps on the lure the first fish of the day was not all that impressive but it broke the "skunk". 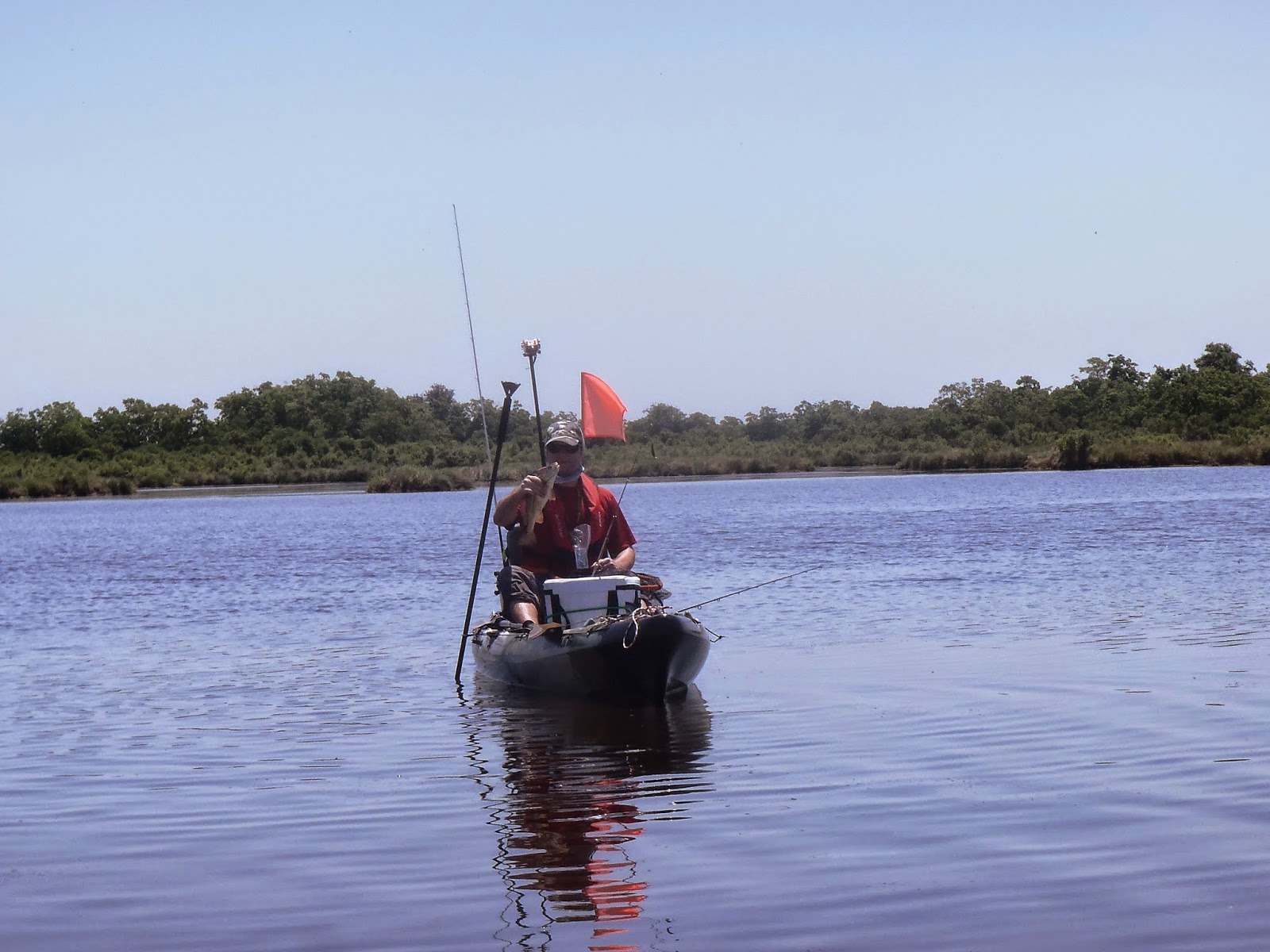 The quality of the picture pretty well matched the quality of the fish!  But we were off to a start.  I was beginning to regret pulling us out of a small cove that held a few fish, in part because we had spooked a few of them but then things were looking up.  But my next few spots that were really strong last year were completely different this year.  The grass didn't have the channels that I normally fished and we likely spooked the fish we were looking to sneak up on.  So it was time to make a major move.  An all or nothing kind of paddle 2/3rds of the way through the day we pulled up and paddled over a mile away.  To another favorite pond.  Paydirt! 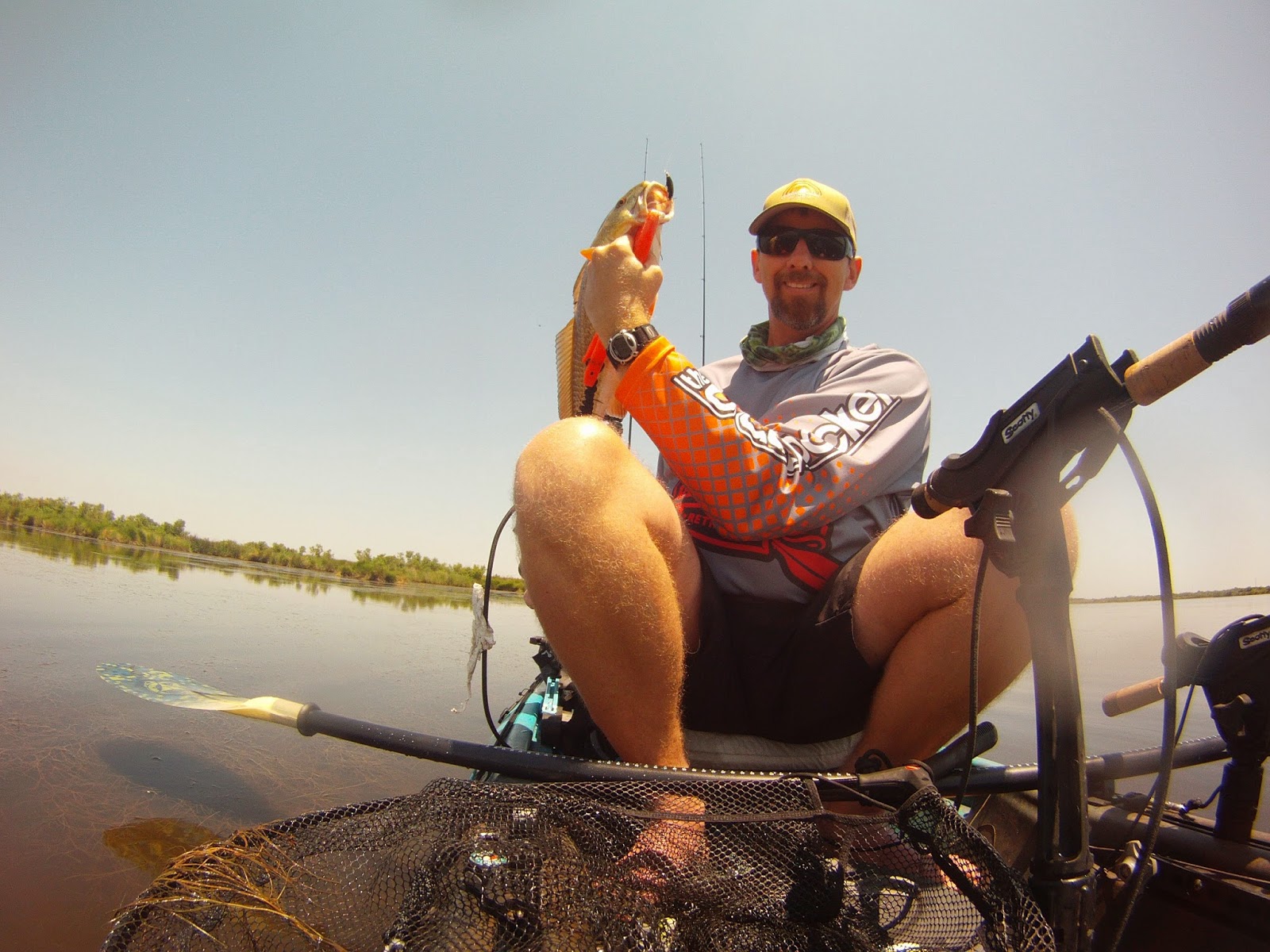 Well first I caught one just before our move - I didn't get a picture of the buddy's next one but he was a little bigger than this one and was his first red on a spoon.  Of course we were throwing the black spoon of death!

We had come into a cove that was mostly grassed over.  Gar were everywhere and mullet to boot.  But in there were a few pockets of clear water.  First pocket produced a fish then the second got us the money fish of the day: 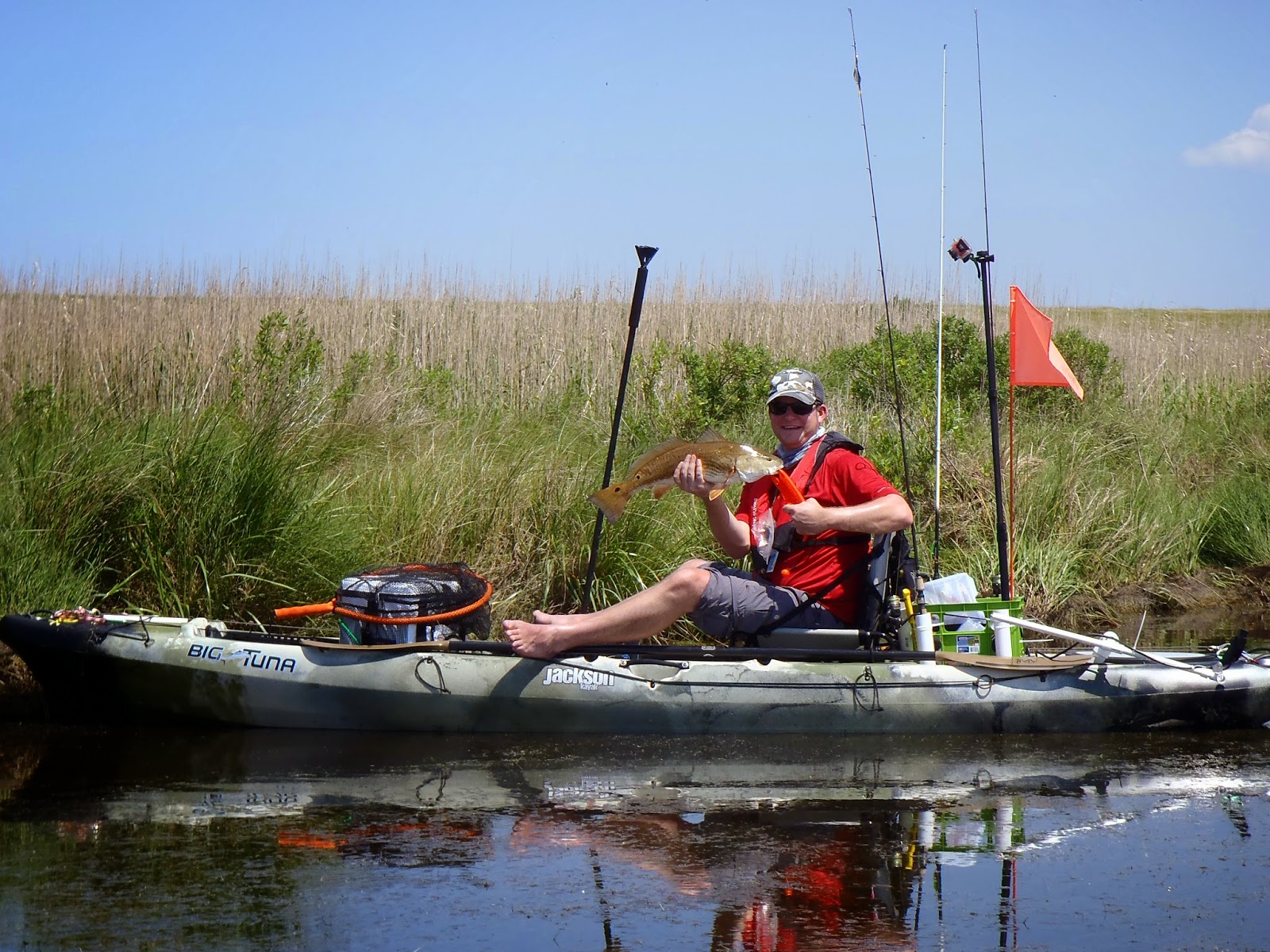 Nice fish!  And another one not long after.  Talk of closing out the 5 fish limit began to happen - and the bite just stopped.  So we counted it all joy and called it a day while we were happy.  I'm confident another hour and we would have limited out but we had a number of things working against us on this day.

Full moon is tomorrow.  I fish anyway but some of my toughest trips occur around a full moon (I've also had a few really great full moon trips).  A north wind was really dirtying up the water - clean water was limited to heavy grass areas.  The tide was really weak.  And the fish were clearly seeing us before we saw them.  None the less we were able to get on some fish and put them in the cooler.  We spooked a number of fish including a couple of bulls that left our hearts racing and our boats shaking!

Just don't give up on those tougher days - it only takes one fish to turn the day around or two or three! 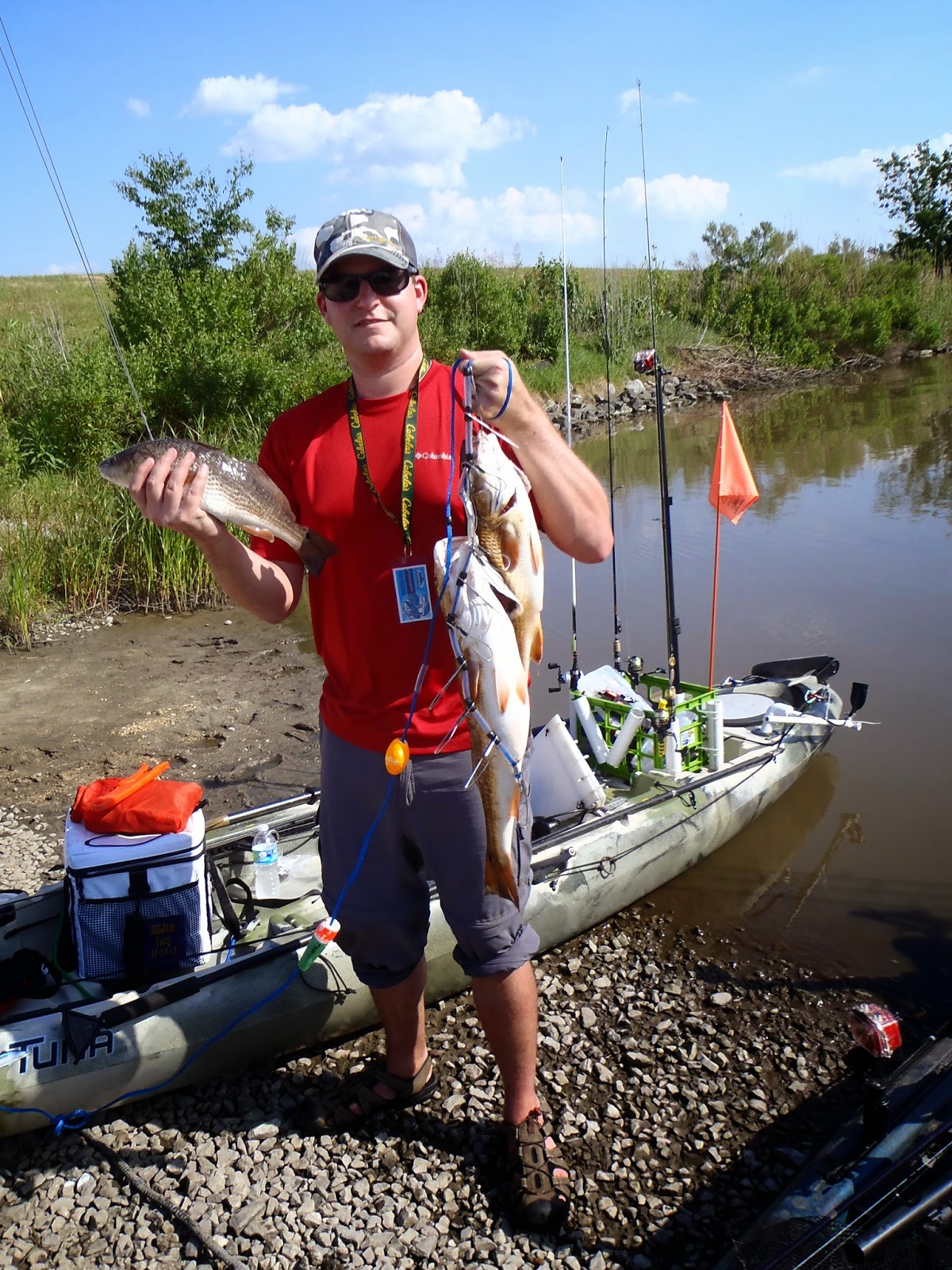 I'm grateful for a day of relaxed fun and God's presence while we fished and shared our faith!

Posted by Bill Crawford at 2:53 PM