Sometimes you set out with a particular plan in mind.  That was the case Saturday.  Two of my favorite fishing buddies wanted to land their biggest fish.  I set out a plan.  Friday I tested it and saw what looked like the biggest redfish I had ever seen.  I would have estimated it well over 40" but really what did I have to go on?  I knew it was really big probably bigger than any I've caught.

So we set off Saturday morning with high expectations and after a little talk decided we were 100% committed to getting big fish. So back to the scene of what I called "The Red Whale".  So we entered a small dead end canal and I sent them down each side to spots where I had seen two different monster reds.

Robyn had the first hook up - but we were pretty dismayed as it spit the hook.  Although I had seen fish three times in this canal I was concerned that all three sightings were one fish.  I held back this concern and they fished on.

Then Robyn approach the area where this monster had actually chased bait and revealed its huge tail to me as it breached and sure enough - the drag started to scream! 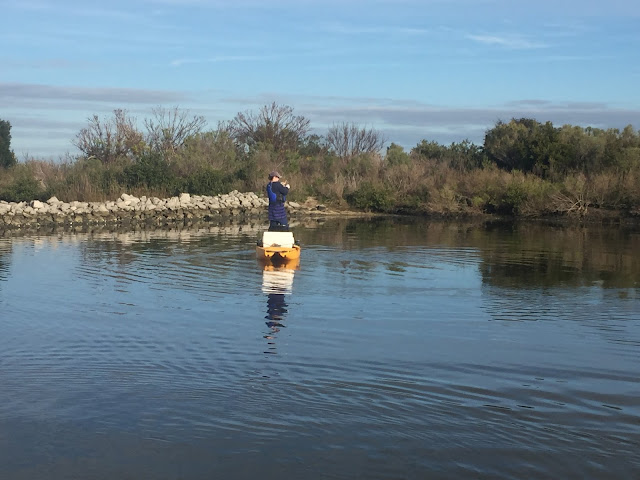 It was awesome to watch her fight this fish from a standing position and nail the transition to sitting. 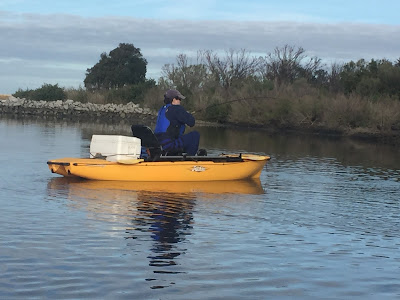 The fight of a lifetime was on but Robyn was up to the challenge and after about 10 minutes the beast began to tire. 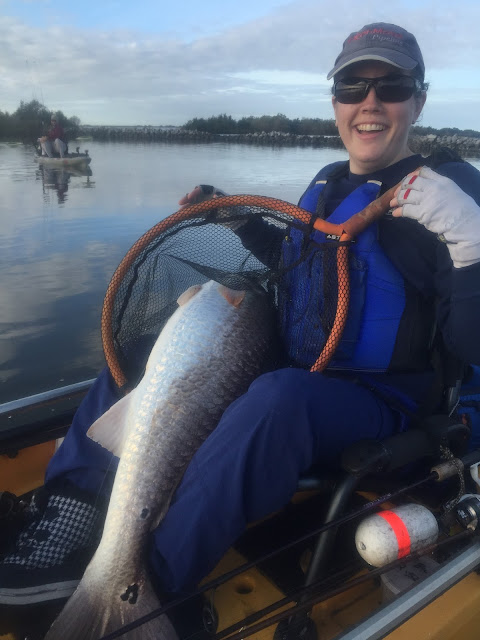 Netting fish this size is no laughing matter.  Many a net has died in the process! 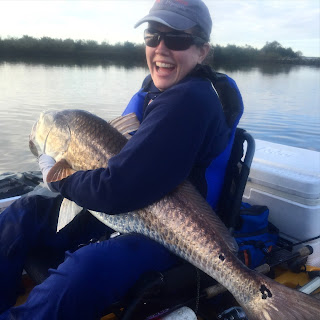 "I'm going to hug him and squeeze him and call him George!"  Robyn's 40.5 inch red was massive.  and it's quite the process just to measure a beast like this one.  So hugging and squeezing is necessary. 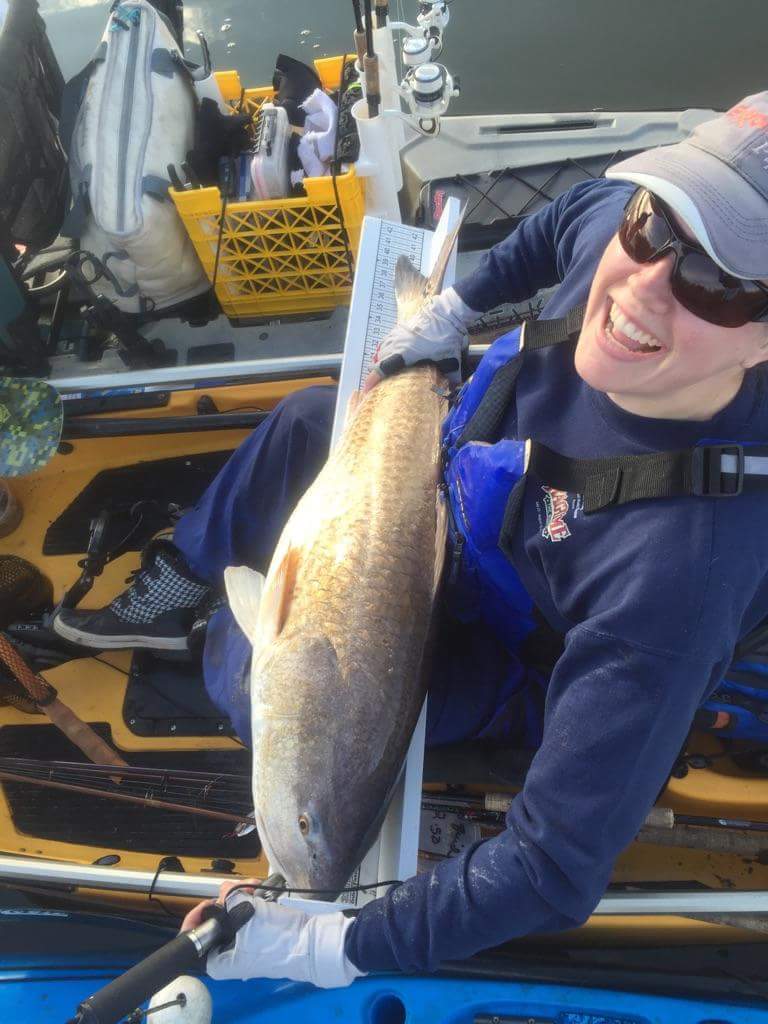 Then we decided it was time to get Lee on a fish and we made a move to a local Bay where I consistently catch giant reds this time of year.

Well it wasn't exactly according to plan when I caught the next red. 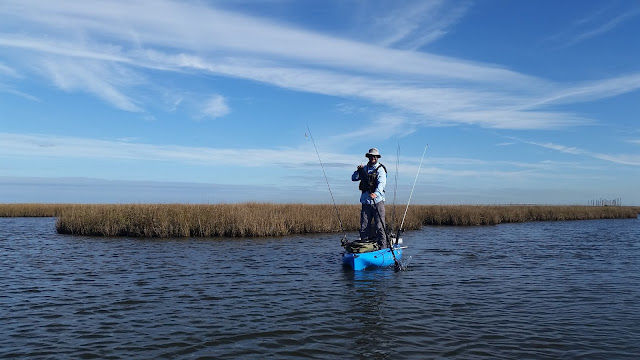 Now it's Lee's turn I direct him to the same area I was in and get him started and it isn't long before he's asking, "Is that a fish or is that the bottom?" 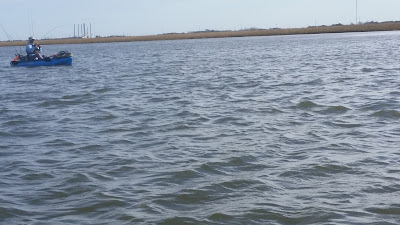 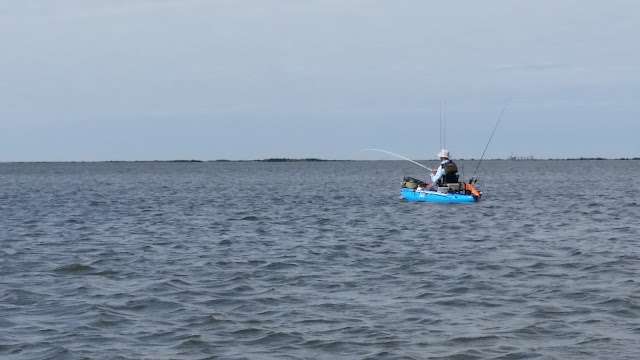 He's moving at a pretty good clip.  as he closes the gap between us I'd say he's cruising at 3mph under fish power.  I know it's a good fish. 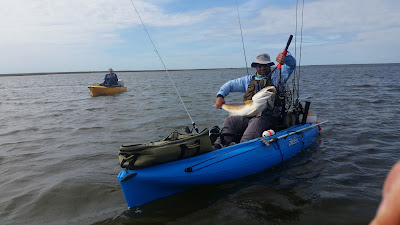 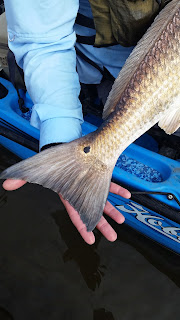 Again measuring a fish like this is quite the workout: 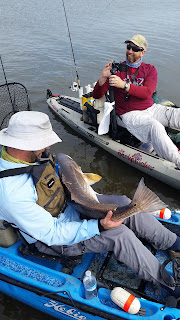 And enjoy the moment - release that fish: 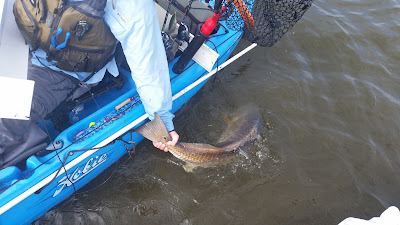 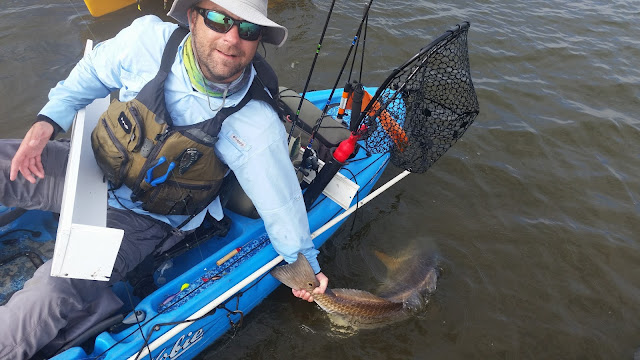 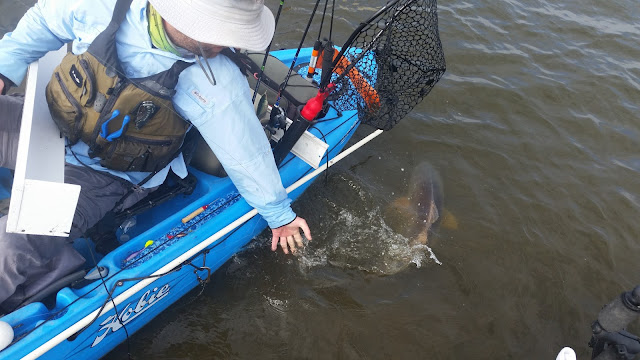 So technically Robyn won the day by .5 inches.  But I would say this couple "won the weekend".  I suspect they will spend the rest of their lives trying to match those two fish.

In closing remember the Sabbath was made for man not man for the Sabbath.  We all need rest.  For many of us that rest will look quite and thoughtful because our weeks are busy and hectic but for many of us they will look like a 10 mile paddle to catch a fish of a lifetime.  Remember too that the Sabbath - the true Sabbath is for worship.  Enjoy all that God has made then give him the Glory for he has done great things!

Posted by Bill Crawford at 9:21 AM