It's time for a confession.  I've been busy and that is a large part of why I haven't been blogging.  Part two of that confession is the trips I've had have been rough.  This may be the toughest year in the last 10 (actually no may about it has been the toughest since I started fishing again actively 11 years ago).

But I've still been getting out there and seeing some nice stuff in the wild.  Meeting great folks.  And I've been learning through it all.

So this past week I got back out to an old favorite spot Point Aux Chene.  Have some new friends there at PAC Kayak Rentals.  They really take good care of their customers.  They have ice, bait, event kayaks to rent - and they do "Mother Shipping" for a fee.  The launch is nicely laid out.  Keep in mind the launch fee is $5 per kayak - I guess the market is catching up with us.  None the less great folks.  Very nice set up.

So I headed out into some familiar spots.  Teamed up with another guy to corner a school of trout.  Topwater for school trout is hard on the arm!  That's all they would eat so it was twitch twitch smack twitch twitch smack about five times a cast every third cast I'd get a fish every fifth fish was a keeper.  So after about 45 minutes and six fish in the bag I headed out to my original destination!

An interesting shot from the topwater bite this needle fish just couldn't stand the pain: 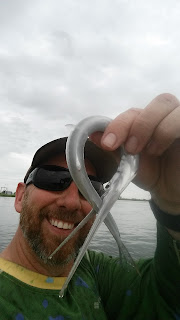 It was a stout 2.4 mile paddle with the reroute around "Alligator Alley" (a very narrow canal with a few gators in it) to my targeted area.  Along the way I was stopped by a very polite lease holder and told I was on a Duck Lease.   Fortunately we were both calm and reasonable and I was given permission to fish for the day and move on through.

One fun moment was watching this shrimp work his way back off the boat: 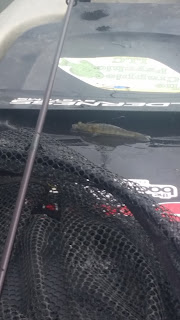 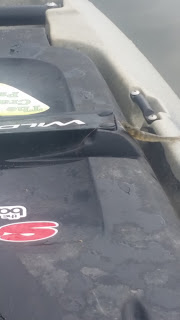 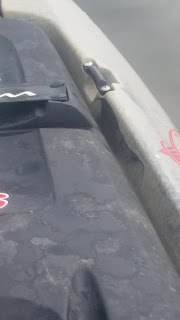 It took him about five hops and he finally made it over the side.

Then I arrived at my destination.  It was AWESOME.  I didn't take as many pictures as I should but lets just say the fish were practically crawling on top of the grass.  I saw 3 fish with backs out of the water almost immediately.  and it was on: 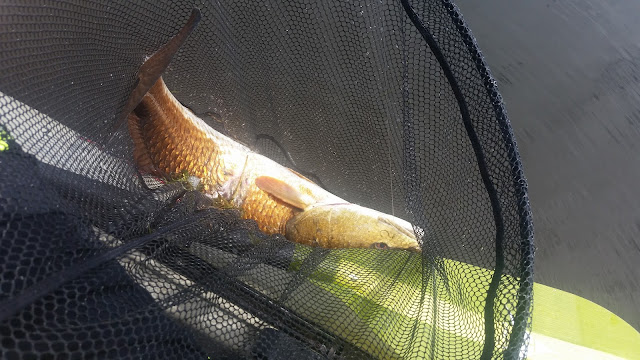 first fish was a bruiser at about 30 inches.  Had to chase him around this grass flat.  I had about 1 inch of water above the grass mat to paddle.  It's fun but it's hard fishing.  I released this guy back into the wild.

Next fish was also nice and obviously exposed to view another beauty at about 25 inches: 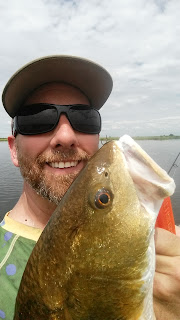 And then a blind cast into a small area without grass produced 24 inch monster: 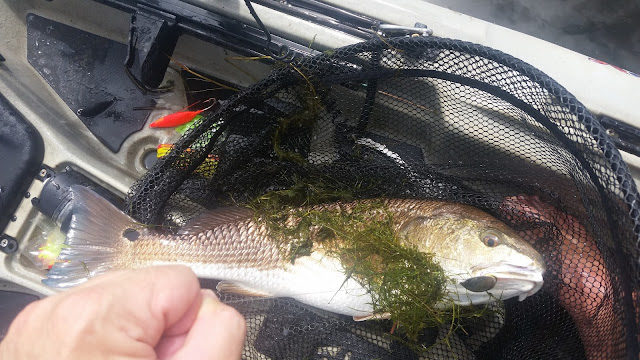 They were all fat as can be and full of crabs when I opened them up to see what was inside.  They are eating very well.

Caught another little guy that didn't merit a picture.  Then I scouted around until a storm ran me home.  It was a tough paddle in but it was worth it as the fishing had been sublime. 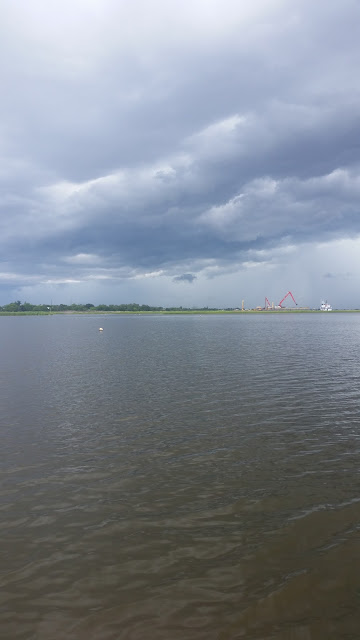 God bless you all and have a great summer!
Posted by Bill Crawford at 10:28 AM