It's called Minimalist Challenge and it is part of BCKFC's Angler of the Year Series of tournaments.  Two years ago I was second place for the year.  It's a great idea for a tournament you receive four soft plastics, and a topwater from TTF one of the event sponsors (and my own sponsor).

You additionally receive four jigheads this year from Rockport Rattler - sorry Rockport but I wouldn't recommend these to anyone.  They are brutally hard to install and just a few strikes from a Redfish and they tear your bait up - and it takes some tearing to harm the killer baits from TTF trust me.  See my previous report for their durability.  For the first time ever I was burning through TTF Lures.  Thankfully they are all killer.  I caught the first three reds on the bottom Killer Flats Minnow, the next 4 on the top Big Killer Flats Minnow, and a couple more on the Jive 45 (middle).

Anyway the format includes starting in the dark of predawn with a "shotgun" start.

I raced the other boats out to the "Sulfur Mine" (one of my favorite winter spots) and I and a trio of Hobie pedal drives were the first to arrive (to their surprise I like to believe).  It was gorgeous, the wind was relatively calm, it was a little cold and I had broken a sweat which was not good in the 40 degree temps.  But I started casting around with my modified cork (took the top water and converted it into a cork) and had nothing.   This is basically the story for the next few hours.  I frantically drifted and paddled to all my standby reefs - nothing.  To quote the Penguins of Madagascar, "It's quiet, too quiet".

Well I should have known the next decision would be a challenge.  I was a little off physically between the 2:30am wake up time and the 2.5 mile sprint I was a little off physically.  But my fishin' buddy and I made the call to move - a move of about 3.5 miles upwind.  About half way I began to flounder - the fishin' buddy has taken up marathon running and it showed in no time he was a half mile ahead of me.  2/3rds of the way there I was done.
I was all Betty White: 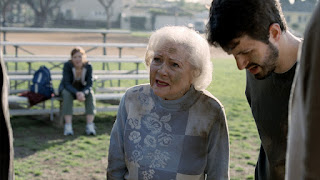 I was whiney - it was all the fishin' buddy's fault.  I was done.  I was ready to quit.  So I stopped and ate a sandwich (sorry Snickers I didn't have one with me).  After I recovered a little and manned up to my own decisions I paddled over 100 ft and landed my first Red.  Thirty minutes later I was at my limit and starting to cull out the smaller fish.  The Fishin' Buddy limited out at the same time when he checked in we compared notes and his were bigger.  So I paddled another mile (fully back to being me). 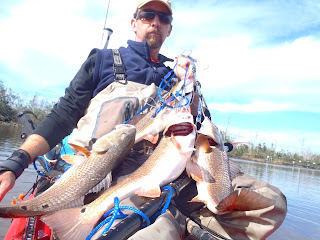 At this point I come along to find a couple of guys just killing the reds.  It's clear they are over their limit and just catching and releasing for fun.  I decide to take a chance and strike up a little conversation and it pays off, they offer me their spot and I get to pull in and I significantly upgrade 3 of my reds. 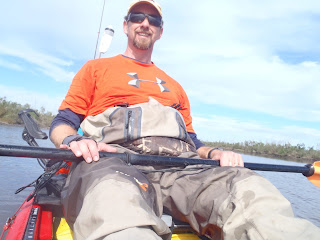 One more was in the bag when I took this shot.  Not an enormous stringer so I wasn't as thrilled as I could be but my smile was back.  We tried for some trout and the fishin' Buddy got four I got nothing.  I really didn't feel too good about the trip but I was happier than I had been earlier. So we began to paddle home with a tight schedule we decided to risk a short cut.  Hind sight:  I should have known better.
About 150 yds from the launch we hit the mud.  The water was "Chunky" as I like to say.  It was real chunky.  The fishin' buddy made short work of slogging through it so I thought I could pull it off.  But I way 60lbs more and haven't run any marathons in like - forever.  I was all Betty White again.  100yds of walking through hip deep mud is brutal.  Every foot is purchased at extreme effort.  I was done.  I was thinking of how they could get a rope to me, how long would it take the tide to come in.  I really didn't even think to cry out to God for help - I was toast.  Physically exhausted like I can't remember being since I was a competitive swimmer doing an Individual Medley.

I looked at my watch - I had 10 minutes and 50 impossible yards to go.  I feel like God all but grabbed me by the arm and pulled I don't know how I finished but I got up went 4 more feet and realized I was back in about 2 inches of water enough to float my kayak on top of the mud.  And I made it to weigh in with four minutes to go.

Realize - I have no idea I'm in the running.  There are at least a dozen anglers in this tournament who I know are better than me, many I would say are my equals.  There's no way a mediocre stringer of reds will get it done - boy was I wrong.  Fishin' Buddy is standing at the launch hollerin' "Come on it's almost over, you gotta get in here."  I'm thinking, "What's his problem?" (hey I'm exhausted and I'm not myself)

So I hit the weigh in and I have 19.6 lbs of redfish and one with four spots for the Leopard Red Calcutta and I'm happy to be alive.  It was the worst day of fishing in my life but I had a limit and I'm hearing news that I may be in the money.  So I have time for the above photo op.

Sure nuff Fishin' Buddy has first place with 34lbs of fish and I'm in 2nd with 19.6lbs of fish!


And Fishin' Buddy (Denis Soignier btw) has 1st place Leopard red with 9 spots and I have 3rd place with Four.

It's a big day for both of us and that's why it was the Worst of Days yet the best of days!  I want to thank the Fishin' Buddy for being the best fishing partner a man can find, and a very patient friend when I'm all Betty White.  Also I want to thank God for answering unspoken prayers.  To God be the Glory - I quit twice on Saturday and God still saw me through the toughest fishing trip ever.

I also want to dedicate this trip to the memory of my dear Friend Rhonda Bridier whose memorial service I performed the next day.  She did everything with excellence and will be dearly missed.  I thank God for always putting my petty struggles into perspective.

Amen and see you on the water!  I need a bath. 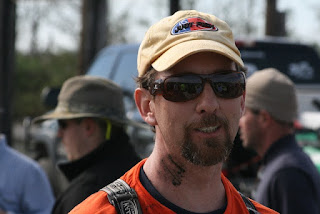 Posted by Bill Crawford at 5:01 PM