The question today is; "Do freshwater tactics work in saltwater?"  The short answer is yes.  The long answer right after this brief commercial break:


Yeah that was gorgeous and the reds were busting the water all around me too.  What a gorgeous start.  But I was in the thick of the grass and was feeling lazy.  But this is when your freshwater tactics can really kick in.  You can put on a weedless frog and skim along the top, you can throw a weedless worm even (or just rig a typical satlwater bait weedless).

Problem:  Hookup rate with reds on topwater - just not that great - for me I'd say it's less than 50% and I just can't handle it emotionally.  You may love watching big bronze fish come charging out of the water and crashing your bait repeatedly and swimming away.  It makes me crazy.  I think I should catch every fish I see.

But recently a fishing buddy from Arkansas put his freshwater skills to work catching reds and even a nice trout: 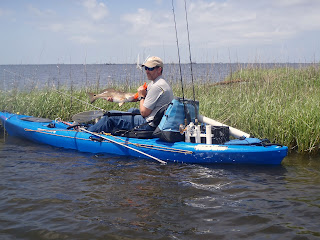 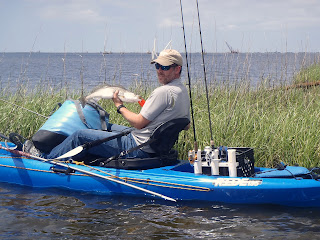 We spent the day throwing the Black Spoon of Death (new and improved version) at reds and trout and eventually we caught both of our limits and a few trout to boot.  The key was working that little spoon through and around weeds beds much like you would for bass.  Truth is a redfish will hit most anything that a bass will hit and often fished the exact same way.  You just have to be ready for what is often a much larger fish that you must allow to run before you board him.

Today it was yet another windy day (forecast missed it again by at least 5mph) and I had to work the edges of the weed beds to pick up four reds before I just called it a day at 10:30am.  I was just scouting as I'm taking some more fishing buddies out next week - Praise the Lord.

Here's some more of God's glorious creations (all of whom got released today to fight again):

Today all reds were caught on a Silver Johnson Silver Minnow 1/8th ounce.

Have a great day and go take a spiritual adventure!

Posted by Bill Crawford at 1:23 PM