It was good to get back to my favorite spot for winter trout.  The Sulfur Mine is just east of Point Aux Chene and just west of Galiano, La.  It's a bit of a paddle for a kayaker but when it pays off it pays off well.

The fishing buddy and I had decided we were fishing no matter what.  So a little wind wasn't going to stop us.  Well that was until we saw a flag standing out straight and the second guessing began.  We stuck to our guns and launched on a gray windy day. 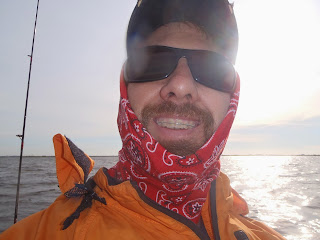 I forgot to take pictures (again) so all I have is this one of my ugly mug.  As you can tell it was a bit chilly - we launched to about 40 degrees.

First spot we started picking up a few 10-12 inch trout.  Almost broke out my fish stretcher - no - no such thing but it was needed.  With the winds we really didn't want to paddle much further but we weren't at all satisfied and the favorite spot was within eyesight.  So I drifted on.

At first I was thinkin, "Horrible idea".  No fish for the next 20 minutes but then I got to my spot and after a little maneuvering - tug.  The Tug of a bigger fish ready to eat.  Nothing like a trout just flashing in and grabbing that lure and making a break for it.  They are a voracious predator and sometimes you can feel it.  Yesterday was on of those days.  All of my fish were caught on a chartreuse saltwater assassin cocahoe steady retrieve on the bottom.

So another memorable trip to the Sulfur Mine everything you want from a two man trip - good memories, great creation, and a two man limit of fish! 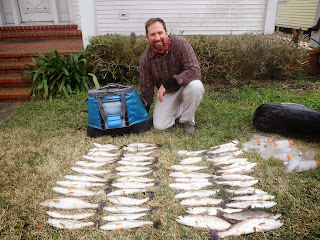