I'll draw from the comments of another angler - 'Having a plan is great but execution matters.'  I talked to many anglers after this weekend's tournament and the truth is we all had plans.  Many; if not most,of them were pretty good plans.  I had a pretty good plan.  But let's go back a bit first....

So this year one of my favorite tournaments "PAC Attack" was moved and became the "Golden Meadow Smackdown".  Just happens to encompass my home fishing waters so I think for many I was considered a favorite.  However, this year all the "redfish only" tournaments were eliminated.  My nickname pretty much spells it out for ya - I do better with redfish.  But none the less we worked out a plan.
Scouting started out beautiful:


After several days of good fishing the fishing buddy and I put our collective minds together and came together with a plan to fish the length of the fishing boundary launching at "Bason's" in Galliano, La and fishing our way south (north wind) to the weigh in in Golden Meadow, La.  All told a 9 to 11 mile stretch depending upon the twisty turns of the marsh.  Everything looked good and our scouting trips had us pretty well "dialed" in. 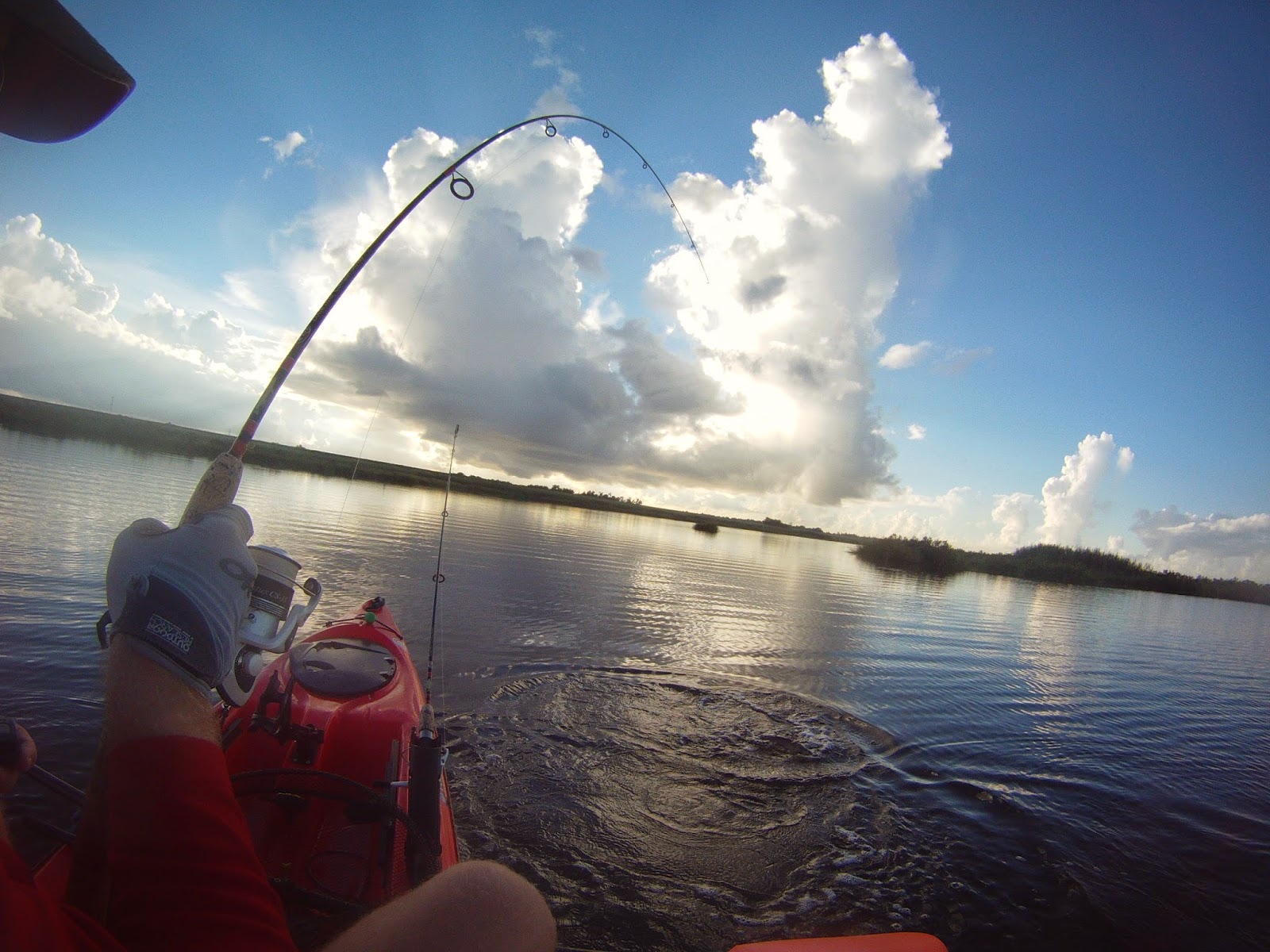 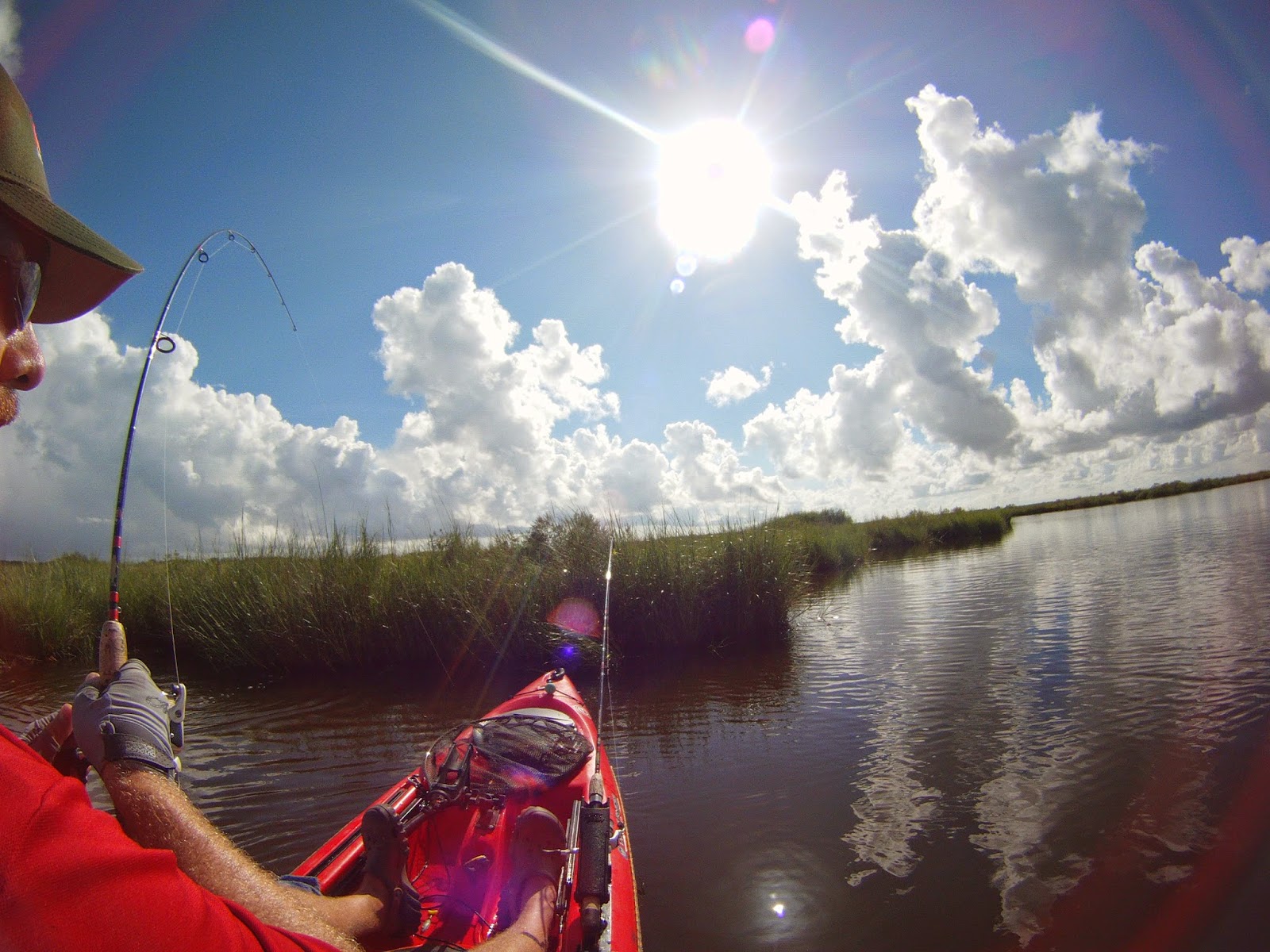 But there was another wrinkle.  Teal Season is announced long after we have to schedule our events.  And sure enough for the second year in a row they picked our weekend to open teal season.  The one boats that go where kayaks go were going to be all over the Marsh.  Before sunrise and exercising their right to bear arms.  Makes for a nervous kayaker especially when talking to one guy at the launch he said my fishing area, "would likely contain hunters".   What to do?

I called an audible.   And never felt comfortable about my plans again that day.  Meanwhile somewhere on the western shores of Catfish Lake "JCraft" was executing his plan with precision.  By the time I released my first fish (a bull red too big for the tournament) he had already landed three fish.  I was fishing unscouted waters and traveling my fishing buddy's game plan.  And my competition was killing it.

After spending 2 hours without a fish worthy of keeping (I released at least 9 smaller slot reds during the day) I was feeling lost, and uncertain.  I called another audible and decided to head back to my original fishing zone.  The fishing buddy stuck to his plan and fared pretty well.


I, made several wrong turns and lost another hour.  So it was 11am I had 1 nice red in the bag (photo didn't come out) and that was it.  That's when the most frustrating 2 hours began.  I quickly caught several more 17" reds.  Just not worth keeping.  Then I lost 5 straight fish - several really nice ones.  Finally I landed a 25 inch fish.  Then I lost 4 more straight fish.  I was beside myself.

I "dialed a friend".  He talked me down and with an hour left I got to work.  I promptly caught 2 fish over 20"s.  Not great but heading in the right direction.  The winds were starting to pick up but I was actually sight casting reds because of the shelter from the levee I was fishing right next to.  Finally I was back in my originally planned spot.  And I hooked up with two more beautiful fish that got away.  But then I quickly caught another 25 inch red.  with about 15 minutes to go I finally had 5 fish.  One last cast and I was able to slightly upgrade my smallest.

Then I paddled in - I was tired.  10 miles on the water I was cramping around my elbows but I powered through to the launch. I met a number of other anglers and I could tell several had done well but several had not.  The fishing buddy had talked to a number that didn't seem to have done that well.  My hopes were creeping up.

So back to execution.  For those who think fishing tournaments are about luck.  Think again.  Although there is the occasional guy who shows up and stumbles into fish.  The guys that win again and again - think things through and execute their plans.  I let the teal season get in my head.  It turns out that the shots I heard were not near my area.  It may well have been empty.  If I had gone there when the wind was down - maybe - I find my reds early and get after some trout.  Who knows?

Did I have fun?  Actually not during that day - it was so frustrating.  But like so many events after the heat of battle settles down.  What a day I had!  I caught over a dozen reds.  Hooked up with nearly that many more.  I paddled a dozen miles.  Once again I discovered the ability to overcome myself, the elements, and many of those I competed with.  I'm not sure of the final results yet - I know I wasn't "in the money" but I think I was in the top 10 (update .2lbs out of the money at 6th place - not bad for a "bad day").  There were nearly 40 really good fishermen in that tournament.  Many executed their plans perfectly or "good enough".  Me I can live with the accomplishments I achieved and will be busily making my next plans (in fact I have a call to make!).  I thank God for giving me the health to continue in this sport, I thank him for the friendly faces at the weigh ins and on the water, and I'm thankful for a loving wife who sends me a picture from last year's first place finish to cheer me up! 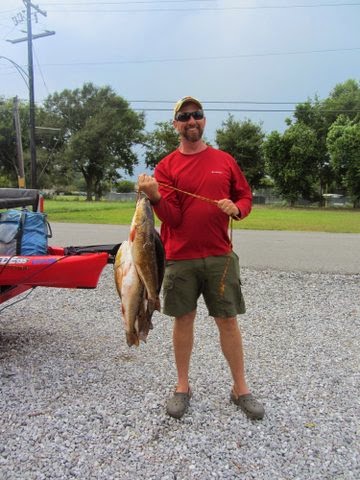 Posted by Bill Crawford at 1:34 PM