I was very excited to get a chance to take on trout challenge 2012 especially after two very poor previous attempts. As my fishing name may give away - I'm not really a trout angler.  Don't get me wrong I catch plenty of trout between 12-18 inches, probably more than most.  However, my count of trout over 20"s is probably pretty low and my count over 23 inches is hovering around half a dozen.  I just don't target big trout or fish those areas famous for big trout.

That being said I was excited to take my show on the road.

I started the week with preparations including adding the new logos: 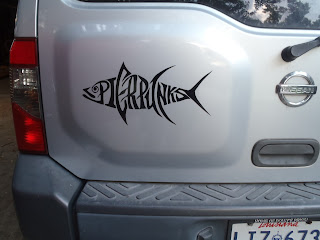 Thanks to pierpunks for the awesome Logos and fishing apparel. 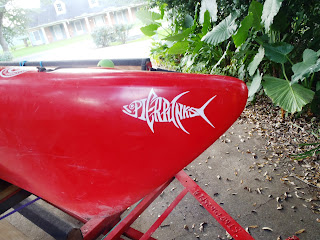 We started the morning around midnight and a 3 hour drive to Lake Charles area.  We made incredible time and arrived at Big Lake about an hour earlier than planned.  We were planning to launch at a little spot in the WMA "Hog Gully" but the "beware of alligators" sign really didn't sit well with me in the dark.  So we moved down to the West Cove Launch in the WMA and awaited legal launch time.  So once we got in the water we were raring to go (the mosquitoes were unbelievable).  I started down the small canal and promptly ran into what I thought was a Gar.  But then I saw something scooting off in front of the boat and put my lights on it - Gator!  Several sets of eyes popped up in fact.  Turned that light right back off.  Fortunately they were little guys and gals all under 5ft.

We then proceeded into a paddle that turned out to be 4 miles straight out in the dark.  Lines in was at 5am so I deployed my bait and trolled along toward our destination.   Along the way I had three trout shake off at the boat - one of which had some size to it.

I had promised myself to have fun no matter what so I enjoyed a spectacular sunrise.  So great I forgot to take pictures.  Then we called an audible and cancelled the next 2 miles of paddle and just fished where we were. Finally at about 9am my line was just absolutely destroyed and started humming.


This fish meant business, it was taking my line like there was no tomorrow.  I found myself wondering, "Is that a trout?"  Finally I got him on board and after he was subdued I called in reinforcements for a picture.  Fact is this trout seemed a lot bigger than it actually was weighing in just under 4lbs.  It was a male so there were no eggs adding to the weight.  This is probably my 3rd best trout to date and likely my largest from a Kayak. 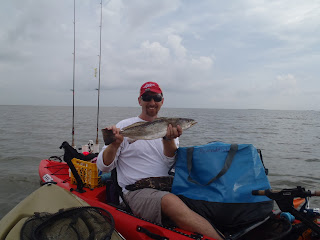 Here's a shot of how rough the weather got.  We just missed the nasty stuff including a water spout that I did not get a picture of: 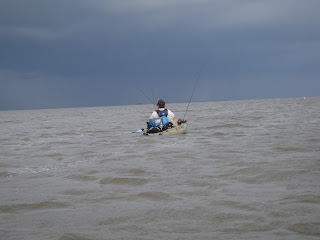 On the way in we were tired the weather was heading south so we just put out our lines and headed for home.  That's when we started catching some fish and we were both able to land 4 fish for weigh in and let the chips fall where they may.

I placed third and my fishing buddy received 10th but we both accomplished a paddling feat of nearly 12 miles. We also had a wonderful day exploring God's creation and seeing God's incredible power on display. We actually did better than some tremendous anglers and that is something to remember.

Kudos to former sponsor TTF as all my fish were caught on a Mumpy Glow Hackberry Hustler.  Many great fishermen struggled that day.  I give God the glory that I had some success.

Posted by Bill Crawford at 4:37 PM