Another Day another Limit

Actually I skipped a trip.  Last week I chose to explore new territory in Leeville, La.  Nothing caught, nothing photographed - and I lost my camera and new camera stand on the trip home- rigging sloppiness will come back to haunt you!

But this week I returned to a favorite area and had much better success.  I blew off a scheduled meetup in Leeville due to an attack of second guesses and discovered I had an appointment in Golden Meadow where I met my fishing buddy for the day "Chappy" from Jacksonville, Fla.  Chappy is an experienced angler and had already done pretty well the previous day fishing blind.  He had reeled in several trout over 20"s without knowing he wasn't supposed to catch trout there!  Sometimes God schedules your trips and this one one of those days.

On the way out the fishing buddy says:  "I've already caught my trout I will be happy to catch one red today."  To which I replied:  "We can handle that, I think we'll do better than just one.  We paddled out to the same spot I'd been at two weeks ago and after seeing a few tails and signs I sent the buddy into a pond and then I disappeared into mine.

I was fishing for "Kayak Wars" so the first two reds under 20" did not make the photography bin (Especially since I was roughing it with my daughters waterproof camera).  I paddled back out to my next spot, seeing that Chappy hadn't moved very far I moved over to the "tail" I had pointed out to him earlier, it was still there 30 minutes later but turned out to be a mammoth SheepHead.  Notoriously hard to catch without specific gear and hard on gear due to their mouth full of large teeth (hence the name).

I managed to catch another red: 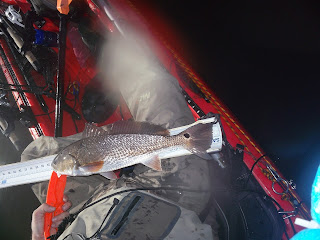 As you can see the camera matters - I normally use an Olympic Stylus "Tough" a great camera that has a shutter over the lens that keeps it from collecting water spots   Then I begin what will become a series of unfortunate events.  I paddle over a school of about 20 nice reds.  I blow them up and never find them again.  Then I manage the first of several horrible wind knots in my line.  I do pick up two small trout.

I try to reboot the morning by switching to trout I catch two and wander back to check on the fishing buddy.  He's on his 5th red.  I've got three and only one over 20".  (I'm regretting sending him to my spot - lol).

I drift back out for some more trout and pick up two more one pushing 18 inches.

Feeling better I drift into a little cove I like and proceed to miss a clear cast on a red, then lose another after a nice fight.  This day is not going too well.  I'm feeling grumpy - say a prayer, enjoy the beauty of the day.  Thank you Lord.  My mind is right again.  Wind knot - thank you Lord!

I drift back over and check in on the fishing buddy - he's pushing 7-8 reds in one pond - not keeping fish so he's lost track - good for him.  My mind is right but it's time to move again.  We chat awhile - I learn that he's a family man, a military man, and an avid angler.  Then we part ways again as I start my next drift up to a nice little cove.  My luck is about to change.

I cast at a nice looking point - zzzzzzzzzzzzzzzzzzzzzzzzzzzzzzzz.   That's no red.  Sometimes you can tell right away and this is one of those times.  I had lost the BSOD Jr. (Black Spoon of Death) on an earlier red (remember the series of unfortunate events?) and I had replaced it with a 1/8th ounce silver Johnson minnow.  The silver spoon will occasionally pick up a trout.  This one is a beauty: 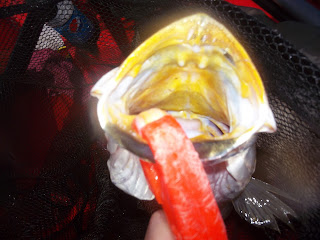 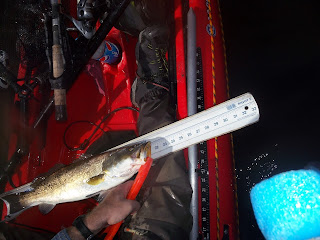 The day is immediately made perfect!  In fact my next stop produces several reds and some fun.  I didn't mention yet that the water was once again gin clear (a rarity in south Louisiana) and I'm sight casting 90% of my fish.  A fun way to fish although it has high risk since you are much more likely to spook them too.
I watch as a stingray and a redfish swim around together - I guess any school in a pinch. 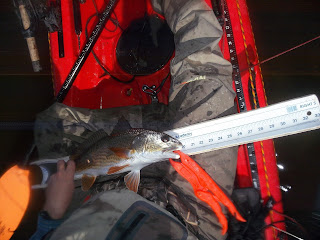 I pick up my limit here but only one makes the photography bin.  Now I'm just wandering around a bit I scare off several more reds but I'm happy now so it doesn't matter.

I pick up the fishing buddy and decide to drift a long reef.  We collect a hand full of school trout.  I pick up 6 more keepers for the bag.  The day is getting long in the tooth so I make one last move but towards home.  A spot I like to call "The little Red School House"  - just a silly name for a small pond that holds lots of fish.

I pick up the two nicer reds of my day both sight casted: 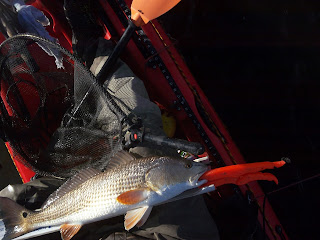 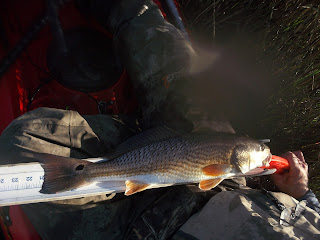 I'm feeling a little rung out by this point.  A longer day than planned - lots of paddling and the wind has been picking up.  I finished with 5 reds in the bag (good eating size) and 10 trout.
My temporary fishing buddy and I part ways with a few last instructions - I hope he had as much success there as the rest of the day.

I thank God for days like this - companionship found along the journey, great weather, more opportunity to grow - and His goodness all over the creation of which I will partake with my family tonight!  Grilled Salsa Verde Redfish - here I come.